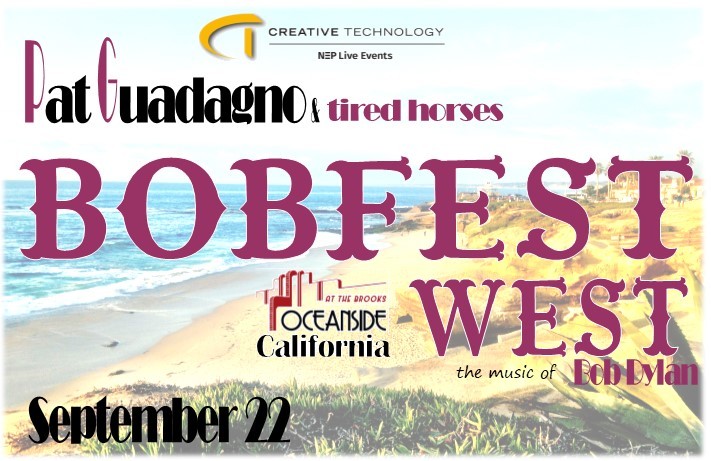 On Saturday September 22, 2018 the powerful music and poignant lyrics of the Rock & Roll Poet Laureate will ‘shake the windows and rattle the walls’ of the Brooks Oceanside Theatre as Creative Technology brings Pat Guadagno’s BobFest – the Music of Bob Dylan to the West Coast.

BobFest is a celebration of the music of one of the greatest singer/songwriter/poets this country has yet produced. BobFest features singer and guitarist Pat Guadagno, whose music was featured in the Award-winning Showtime series, Californication, and whom the New York Times has hailed as “a well-traveled troubadour with a remarkable repertoire.” Now in its 21st year BobFest is coming to The Brooks in Oceanside! Tickets are on sale now at Oceanside Theatre Company Tickets for $25 each. Doors open and happy hour begins at 7pm, and the performance will start at 8pm.

Bobfest Oceanside – BobFest
A Celebration of the Music of Bob Dylan…